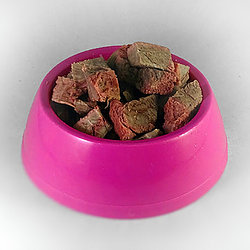 The way HPP works is by applying high hydrostatic pressure, which is pressure exerted by a liquid, through a water bath that surrounds the product. The pressure is uniformly applied from all sides and throughout the product, which keeps the food from being crushed.

The process does not cause the foods to undergo significant chemical transformation, but does successfully eliminate all pathogenic microbes from the food, including bacteria such as Listeria, Salmonella, and E. coli.

Some of the Benefits from Sterile Raw Food

Raw food that has undergone HPP provides pets with a convenient source of a better-quality food that is also sterile.

Many veterinarians feel much more comfortable recommending sterile raw foods for pets, particularly those with compromised GI defenses. Pets dealing with dysbiosis and inflammatory bowel disease (IBD/IBS) may not have the gut resiliency to handle normal bacteria loads found in some foods. Many of these pets do much better on sterile foods until their gut issues are healed.

So sterile raw foods can be a good compromise for pet owners who want to provide the benefits of raw food to a dog or a cat, but worry about the risks, or for those which a true unadulterated raw diet would pose an unacceptable risk to the pet or even themselves. Keeping in mind that some pet owners are also immunocompromised or immunosuppressed, but they still wish to feed their pets the best, most optimal diet.

Fantastic #britishweather but we all need to keep

#internationalcatday the purrfect way to celebrate

#feelgoodfriday 🐾 yeay.... the weekend is nearl

Yummy treats from Redpaw, something different ever

Our Air Dried Pork Skins have been very popular th

If your pet could talk - what would they say to yo

Redpaw stocks everything your pet need to enrich t

You asked❓we listened 👂and now our customers

Don’t forget we are now open again on Monday aft

At Redpaw we pride ourselves on providing great pr

Sunday are for lazing in the sunshine ☀️ #cats

Opening the shop back up on Monday afternoons 1pm

Was your pet named after a famous person, or do th

Everyday we are told to eat more fresh, healthy fo

The hardest part of a Redpaw delivery is choosing

Give a dog a bone 🦴 Redpaw has a large selectio

We love fresh natural raw pet food at Redpaw, not